Broadcasting watchdog OFCOM have cleared daytime TV show ‘This Morning’ of any wrongdoing over an item which featured bondage equipment and sex toys. END_OF_DOCUMENT_TOKEN_TO_BE_REPLACED

We all know that local councils don’t have enough money. However, they always seem to have ways to get some extra cash. These however are usually on the lines of raising taxes, or cutting help for the most vulnerable in society. However, the authorities in Kansas have thought of a much better way of raising much needed funds. END_OF_DOCUMENT_TOKEN_TO_BE_REPLACED

As people who enjoy the kinkier side of life, we have always had our fair share of people thinking we are weirdo’s, and either trying to keep us at arms length, or even worse, making us the victims of prejudice. END_OF_DOCUMENT_TOKEN_TO_BE_REPLACED

Here at Kinky.co.uk, we specialise in offering you the best kinky clothing on the internet. We know full well our items are going to be used to help people engage in some crazy things, and bring a lot of pleasure into their lives. There are however things that we in no way expect our products to be used for.

A cheeky caped crusader wore a superhero outfit and women’s underwear, whilst raiding a second hand shop, completely unaware he was being filmed!

In behaviour that would have left the crime-fighter red-faced, he also slipped on a bride-to-be’s sash, before waltzing around outside the shop in Australia for the next forty minutes.

Most people will at least try to rob you with their clothes on, surely,” she said.

“He walked in just wearing a G-string, then walked around the yard, going through boxes and stuff, and he picked out a Batman costume and a Batman doll. It was pretty strange.”

Well, unfortunately for our caped crusader, he was unable to vanish into the shadows and was later arrested.

The 35 year old man, who apparently lives close to the shop will appear in court later this month.

I am going to venture that alcohol may have been involved in this story somewhere down the line. I am also going to guess that this isn’t the usual type of guy who comes to Kinky.co.uk.

They say it takes all sorts to make the world special. Well, this guy is certainly one in a million!

Many men have a fascination with visiting, or being visited by prostitutes. They may not admit it to their friends, and certainly not their partners, but the illicit pleasure is too much to resist for them. However, many understand that getting caught by someone they know is the worst possible outcome of one of their ‘meetings’. Sadly, for Titus Ncube of Bulawayo, Zimbabwe, the result was much, much worse. END_OF_DOCUMENT_TOKEN_TO_BE_REPLACED

Though we would never condone anyone breaking the law, this little nugget from over the Atlantic had everyone at Kinky.co.uk in stitches this week. END_OF_DOCUMENT_TOKEN_TO_BE_REPLACED

It is the latest Facebook sensation. The tale of a grandfather who disowns his own daughter because she disowned her gay son (his grandson) For those who don’t know what we are on about, here is a copy of the letter which is doing the rounds. 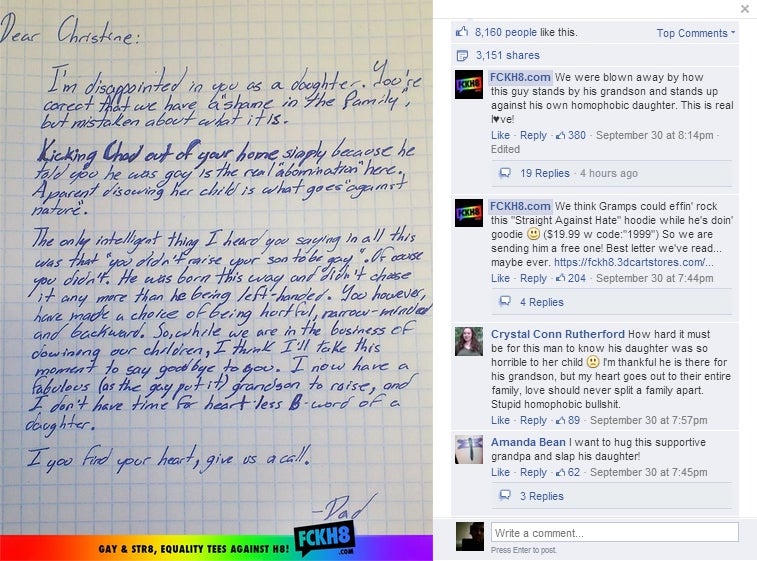 OK, before I go any further, I know it is on Facebook, and consequently it is likely to be a load of rubbish. In much the same way as the apparent Bill Cosby “I’m tired” piece (where the famous comic apparently went on a right wing tirade against the poor, unemployed and Muslims) turned out to be nothing to do with the American legend, this could be nothing more than a made up, ‘right on, PC’ letter designed for people to laud the grandfather and slam homophobia That would be interesting, and obviously homophobia, like any other form of prejudice should be eradicated from society. But in general terms, the letter does make me wonder what the best ways to end bigotry in society actually are?

As people engaged in the ‘kinky lifestyle’, for years, we have been at the butt end of prejudice and stereotypes. For ages people thought we were a sub-culture who hung around in dungeons getting our teeth kicked in by 40st women. The outside world had no idea about what really went on. Look at celebrities like Frank Bough. He went from being the most loved man on daytime TV in the 80′s, to a figure of ridicule, even having to go on TV to apologise for his actions, just because he liked S and M.

How Best to Stop Prejudice

Yet times are changing. Kinky is becoming more and more accepted as the years go by. We have done this by persuading people that we are normal. As information becomes more readily available on the internet, people realise that we are just like them, we just express ourselves differently in the bedroom.

We didn’t achieve this kind of acceptance by making ridiculous, grandiose gestures and plastering them over Facebook, to get likes from people who are likeminded to us anyway. Look at the language used in the letter. The ‘grandfather’ calls his daughter “narrow minded”, “backward” and a ”bitch”. He then says at the end “If you find your heart, give us a call.”

Well she may have wanted to discuss it with him, but the tirade of abuse is only going to upset his alleged daughter and put her back against the wall, encouraging her to continue with her behavior as mellowing would be seen as a weakness.

In any alternative lifestyle, there will be people who really are scared by what they are hearing. In this case the ‘grandfather’ should be trying to bring the two together so they can communicate and hopefully rekindle their relationship. Not committing the same over the top reaction she is guilty of.

If we are all going to learn to accept each other, then we have to understand the other person point of view. As we have seen in the kinky way of life, the best way is to let people know that are normal, and if people need time to understand you, give them that time. There are no quick fixes with some people, but if the love is there, it will usually sort itself out in the end.

Nothing is ever sorted out by an ‘us v them’ mentality. As with homosexuality, kinky sex is still, despite its rising acceptance, not understood by everyone. But both have come a long way over the years. We have seen evidence of this first hand with the rising popularity of our products. The demand for bondage gear is insatiable, but that doesn’t mean there isn’t a way to go.

Let’s keep going. One story of family being broken up by intolerance (even if it is just a story) is one too many. There will come a day when these stories are just a thing of the past, I am sure of it.